It only supports Scanning on Service Pack 3, However, if you run it on an SP2 system it will offer the ability to dump a known SP2 updates list that covers every update im aware of. Though some SP2 stuff will no doubt be superseded. But, I designed this primarily for systems running SP3.

It doesn't require any 3rd party downloads such as visual basic, Microsoft .NET or anything else at all. This software looks at your registry for hotfix information and it also looks into some folders to check for certain files.

The whole thing was written in Notepad.exe by hand and took two weeks, a few hours each night testing and debugging.

While i have done my best to code it in a way where it can define XP Home, Professional, MCE 2005 and Windows Fundamentals for Legacy PC's, only your feedback can really improve its functionality.
Though i gotta say, I have done some serious testing with it.

To me, this program is a homage to two decades of creativity, It's almost 2020, SO I'm giving something back to XP itself.. While folks rave on about software and hardware, the OS was only ever mentioned when it crashed... and its always just been taken for granted while people spoke more highly of things it ran... Those who know me, they know the kinda stuff ive created upon Windows XP, and before that Windows 98SE.

So ive given XP and its users the capability to do something they won't even fully comprehend until 2027, I could no doubt be dead by then, but this will live on... This software will be very useful..
(when that Microsoft Update Active X dropdown fails because the ActiveX Certificates Expired, if the sites even live)

The .NET scanning on MCE will report 1.1 missing if it is, likewise for 1.1 SP1, Because they are needed by MCE Rollup2.

However, if you run it on any other version of XP then .NET 1.1 SP1 won't be reported as missing unless 1.1 is installed. My program won't suggest installing the .NET framework just because its missing.. unless its needed...

What it will do on every other XP, if it finds a .NET version installed, it will check what updates its lacking. It will display what .NET updates the system requires, but as i stated, it won't suggest installing something thats not needed.

You'll notice the menu also offers random information related to aspects of Windows XP.
that might expand into more sub menus at some stage.

This Will Recover Lots of Drive Space for Windows XP Home, Pro, Media Center 2005 and Windows Fundamentals.
"WARNING!!" If You Have Just Updated Windows OR INSTALLED ANYTHING then YOU MUST Reboot BEFORE Running This.

This Removes The Following Large Folders

It Also Removes All The Mini $KB Uninstall Folders and KB Logs from Windows Updates Spanning January 2002 to April 2019. And Clears Windows Temp and Current User Temp Folders.. File Not Found Just Means Its Not Their To Remove.

A reboot before using the cleaner is well advised incase an install you did has pending file changes laying in a temp folder.

This doesn't touch the registry at all, so it won't break codecs and plugins like most system cleaners by default do. It just looks for specific files and folders that are safe to remove, those which get left over by installers.

The Windows XP Update Installer Side (This is Not ready Yet)

This will check the system for needed updates, and attempt to install them.

That means, If an update file is in the same folder "as my program" and your System needs it
then my program will install it.

If an update is needed and my program can't find it, then it'll tell you the file is missing.

This can be run over and over again if you need to add files, it won't re-install things.
It also understands the variances between Home, Pro, Mce, Wflp.

NOTE: While it will install the likes of KB955704 and KB952011 (if present)
It won't demand them or give an error if they're not found, Likewise for some others.

Essentially, Every "file not found warning popup" will be an update your system actually needs.

Just Remember, My Update Scanner can compile a Missing KB's list that covers most Optional and all Security Updates, this can install them if the files present. It will reboot at times, just run it again...

My advise for the Update system would be to place the windows updates and your chosen Internet Explorer version (be that the updates for 6.0 or the installer for IE7 or IE8)  and then run it.

If IE7 or IE8 installs then it'll reboot the system, re-run the script and it'll update the IE7 or IE8 and then Windows.

Only then would i move any .NET stuff into place (as .NET updating takes a long time)

I think WMP reporting will be a nightmare (as most WMP versions use a few updates that are the same per version) and then 4 or 5 that are not. This means that if a user had WMP 8, 9 or 10 (with updates) If they then installed v11, it would still need some of those updates again,
And to check for them is pretty problematic, as they already appear to be in the registry from the last time.

Maybe a way to test a DLL version i guess?, but right now my scanner depends on nothing besides the command prompt and ide like to keep it that way.

At some stage, when the Install updates side is set up, i might add the ability for users to add custom files.

Which those in turn would be run, if my exe detected you had added your own registry settings or
tweaking files into the folder, while using those specific file names for them.

Like i said, No one has ever truly written anything like this.. that didn't need something else...

* YOUR RIGHTS USING THIS SOFTWARE *

THIS SOFTWARE MUST NOT BE DISTRIBUTED ON WEBSITES WHERE A USER IS FORCED TO REGISTER AND/OR PROVIDE ANY INFORMATION TO DOWNLOAD IT!

THIS SOFTWARE MUST ALSO NOT BE DISTRIBUTED BY MEANS OF FORCING A USER TO INSTALL A PROGRAM JUST TO DOWNLOAD MINE!

FRANKLY:
Don't even discuss my software if your comment requires a paid subscription or a login just to read what you wrote.

You Simply Have No Rights to any Financial Gain OR Data Mined Information on the backbone of my work or my time.

IF YOUR UNSURE WHAT THIS MEANS, ITS PRETTY SIMPLE:

Imagine you google "How can i update windows xp"  result comes up with the question.. you click ok on the cookies or no cookies.. As you scroll past the question theirs a comment saying you can try something (which you know wont work) So you keep scrolling then a video begins to play, it then moves to the side.. You see a reply MARKED BEST ANSWER... faded out with a SUBSCRIBE FOR $ A MONTH button to view the answer..
IM REFERRING TO PEOPLE WHO ACTUALLY USE WEBSITES LIKE THAT!
I DIDN'T MAKE THIS TO MAKE THEM MONEY!

At this point in time, I provide this software for free.. keep that in mind...

No one has ever written anything like this, that didn't need something else...
It doesn't go anywhere near your DataStore.edb or even need wsusscn2.cab..
My program is more reliable Today than Windows Update and Microsoft Update..

Some standard XP updates are superseded by Pos updates, that i have yet to bother with..
This reports what XP needs from SP3 to 2014 and Embedded from April 2014 to April 2019

I shall end this post with a screen shot of what Microsoft would consider a fully updated Windows XP Professional (that apparently just lacked IE8)  My scanner begs to differ the offerings compared to what's really missing... 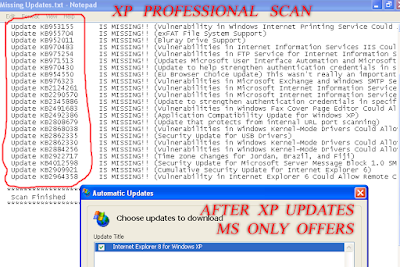